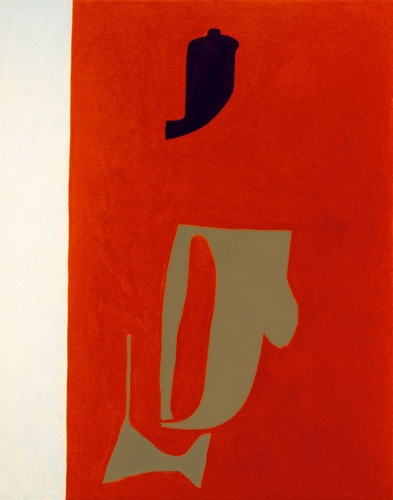 The new “Painting Nature With a Mirror” exhibition at the Musée d'art contemporain de Montréal (MACM) features the works of several Concordia grads and professors. The exhibition focuses on 1980s painting in Canada, showcasing more than 20 paintings and drawings from the museum’s permanent collection, some on display at the MAC for the very first time.

According to the MACM, “the 1980s saw the return of a style of painting that, rather than attempting to follow the course of modernist abstraction inherited from the mid-century avant-gardes, adopted a sometimes disconcerting heterogeneity: figuration and abstraction were employed simultaneously and aesthetic explorations were marked by diversity, but above all by a desire to be free of the previous generation of artists’ conceptual rigour.”

Plotek sat down recently for a brief Q&A about the exhibition, and the art scene and studies in Montreal and Concordia.

You and other Concordians have pieces in the “Painting Nature With a Mirror” show.

Leopold Plotek: I’m glad the MAC has taken one of my pieces out of storage and put it on view. My painting dates back to 1980, is called The Song of the Shirt, inspired by a labour union anthem of the early part of the 20th century. My painting is part of a show of pictures from the 1980s, so there is a huge variety of things. The sixties and seventies were a time of abstract modernism, particularly in Quebec, and was dominated by hard-edged abstraction which looks rather sweet and decorative when we look back on it now. But the eighties represented a kind of turning away from that and opening up to different kinds of figuration, wall painting, graffiti, informal things, pop – it was an opening out rather than a closing in.

How has Montreal’s art scene changed since you first exhibited your work in 1976?

The Montreal art scene has improved. It has changed like most of the world has changed – it has gone global and international.  The art scene in Montreal in the seventies was rather more insular. People had local careers. If they were lucky, they had national careers. They rarely had international careers. This is before the Internet, before social media, before one could shoehorn one’s work into the global conversation as easily as one can today with the click of a button. My students now take off and live in Chicago or L.A. They have careers wherever they happen to be.

What was Concordia’s influence on the Canadian painting scene of the 1980s? Was there a school of thought or kind of practice that emerged from here?

By the eighties, the Concordia studio programme was still very much characterized by formalism, and by its two most famous exponents, Guido Molinari and Yves Gaucher. These two were wary colleagues and fierce competitors and had brought Quebecois 'plasticien' painting – typically called, in the English-speaking world, 'hard-edge' – to the apex of its influence. If there was a 'Concordia style,' it would be typified by them and their pupils. This is not to say that other tendencies were not present in the department: its founder, Alfred Pinsky, had brought in an enormously varied group of artists, among whom there were exponents of expressionist figuration (Marion Wagshall), and the conceptual art which was soon to establish itself as the dominant Canadian style.

By the end of that decade, the New Figuration had made itself felt in Europe, various informal or anti-formal tendencies – graffiti, new media, installation, performance-art – became attractive to students, and all art schools, not only ours, splintered into a dozen directions.

You studied at McGill, at Sir George Williams University and at the Slade School of Art. At SGWU – now Concordia University – you were the pupil of legendary artists Roy Kiyooka and Yves Gaucher.

The Department of Fine Arts had just been founded (in 1960) by Alfred Pinsky and was located in the Hall Building, and Roy Kirooka was – next to my father – the most important man in my life. I learned what it was to be an artist from Roy. And Gaucher was really one of the eminent abstractionists in Montreal. He was a beautiful man. I remember these people when I teach. I remember they handed me a kind of permission to become the person I was dreaming of. So if I have an ambition as a teacher, that is my ambition.

They fully complement each other. Art schools – whether they be independent academies or departments in universities – are parts of the global art world. Though there are no boundaries or passports, it is a real thing. Our instructors and professors are fully integrated in that world and pass on the message to their students that they can step away from a small, local, parochial life for something wider and bigger if they so choose.